Nice to Meet You, Ada Lovelace! 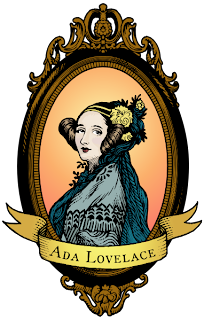 Do you know who Ada Lovelace was?  Shoot - neither did I prior to just a couple of days ago when I learned it was Ada Lovelace Day.  Born in 1815, Augusta Ada Byron (yes, daughter of poet Lord Byron) was an English mathematician and and is now known for her work regarding an early mechanical general-purpose computer, the "analytical engine". Her notes on the engine include what is recognized as the first language processed by a machine; hence, she is considered the world's first computer programmer.  So what is Ada Lovelace Day all about?  This year, Ada Lovelace Day fell on October 16.  The day is all about telling your story of a woman in science, technology, engineering or math who helped make you who you are today.  It's about celebrating brainy girls as role models!  I know that in my career I've looked up to a lot of women, whether they were teachers or professors, or coworkers, or even some of my own relatives.  Who inspired your braininess???

I came across an interesting article that listed a number of women who made significant contributions to the STEM fields.  Considering these accomplishments, why is it, then, that women make up only 25% of those employed in the STEM fields?  Perhaps we need more role models.  Perhaps we need STEM in our girls' daily lives...a regular part of their learning and interests, so that choosing a path towards science, technology, engineering and mathematics isn't so foreign, daunting, or intimidating.

And why should STEM be any of those things to girls?  Check out this TED talk I just stumbled upon - it's about science and play, and how (when you think about it) scientific experiments really are just games.  The talk gets interesting around minute 6 because a young girl is brought in to talk about her class's experiment with bees, which was published in a peer-reviewed journal.  Really amazing!  Let's keep our girls' brains playing for as long as we can!