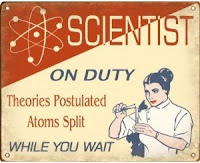 I'm a little embarrassed to admit this, but I've lived in the Portland area for over three years now and I just visited the Oregon Museum of Science and Industry (fondly known as OMSI) for the first time.  And I have to say that it's a pretty awesome place if you want to get your hands on real science...in fact, they actually want you to play with stuff!  I didn't see one "do not touch" sign, or see any parents yelling at their kids to not play with something that just looked too irresistible not to touch.

While I enjoyed the earth science exhibit immensely (I got to be a weather forecaster in front of a green screen!!!), the biggest surprise for me came when we went to the physics lab.  In front of the physics lab they had a large bulletin board with all sorts of newspaper clippings about physics in the news.  And guess what - about a quarter of them were all about women who excelled in the field of physics and mathematics.  I took a little time to read about some of them.

A New York Times article (March 26, 2012) titled The Mighty Mathematician You've Never Heard Of, described Amalie Noether, the woman who Einstein called the most significant and creative female mathematician of all time. She invented a theorem that united "two pillars of physics: symmetry in nature and the universal laws of conservation. Some consider Noether’s theorem, as it is now called, as important as Einstein’s theory of relativity; it undergirds much of today’s vanguard research in physics, including the hunt for the almighty Higgs boson." Wowzers!  In light of that, it seems logical that many of her contemporaries viewed her as the most significant and creative mathematician - period - regardless of her gender.

And there were other women featured in more articles, too.  For example, Margaret Murnane, a University of Colorado at Boulder Professor, recently won Ireland's top science award for her work with lasers and x-ray technology.  And Dr. Mildred Spiewak Dresselhaus, a professor of physics and engineering at Massachusetts Institute of Technology, won the 2012 Kavli Prize in Nanoscience for her work studying the properties of carbon.

What amazing women we have to serve as role models.  Once you start looking, it seems that they are everywhere!  I suggest you stop by your nearest science museum, and no matter how old (or young) you are, play.  Use your hands and your brain - what will you learn?  What will you envision yourself doing?  Who knows...perhaps some day you'll be playing with stars!

Well, hello there!  Thanks for joining Brainy Girls as we launch our braininess into the Interwebs!  I'm happy to finally say that we're ready to go live with our new blog, Brainy Girls.  With the exception of "Work It", you'll find that all the pages in the blog are ready for your reading enjoyment (and trust me, I'm working on Work It).  This blog is aimed at sharing cool and interesting news in the STEM fields with girls between the ages of 11 and 17 (or roundabouts - girls and women of ALL ages are welcome here!).  What are the STEM fields?  Science, Technology, Engineering and Mathematics.  Exciting, huh?  We want you to know that it's awesome to be brainy, and that you can be everything you already are, plus brainy too.

Here's how this blog works:
I am VERY much looking forward to meeting my readers and hearing back from you about what you'd like to read about on Brainy Girls.  I hope you love this blog and are as excited as I am to see it launch!

September and October's Theme: Nice to Meet You!

Greetings, Brainy Girls!  This blog and corresponding facebook page is ALMOST ready to go live.  Hurray!  I just need to add a few things, write a couple of things, and we'll be all set for launch.

In the meantime, ponder this: the Brainy Girls theme for the month of October (ok, and the rest of September) is "Nice to Meet You".  Since Brainy Girls soon be introducing ourselves to the Interwebs, I would like to say that, yes indeed, it is nice to meet ALL of you!  And since we have a theme, it means that a lot of the content that will be featured on this blog (i.e., Feature Essays and Work It) will follow this theme.  So, what does "nice to meet you" mean to you?  Who would you like to meet, and why?  Who would you NOT like to meet?  I'll be giving you some potential answers to those questions mega-soon.  But if you want to chime in, feel free to leave a comment below, or contact me through the Feedback page.

Anywhooooooo...enough of that.  Take a look at this video and guess who these girls got to meet at the White House Science Fair earlier this year...yup - our very own POTUS (that's President of the United States fyi)!  And it was clear that he was very impressed by what these girls had dreamed up and built.  Be sure to watch the last part of the video to hear what advice these girls have for others.  You might have an itty bitty dream growing in your mind that could some day - and sooner than you think - turn into a BIG idea!  Way to represent, young scientists!

Email ThisBlogThis!Share to TwitterShare to FacebookShare to Pinterest
Labels: Nice to Meet You
Newer Posts Home
Subscribe to: Posts (Atom)